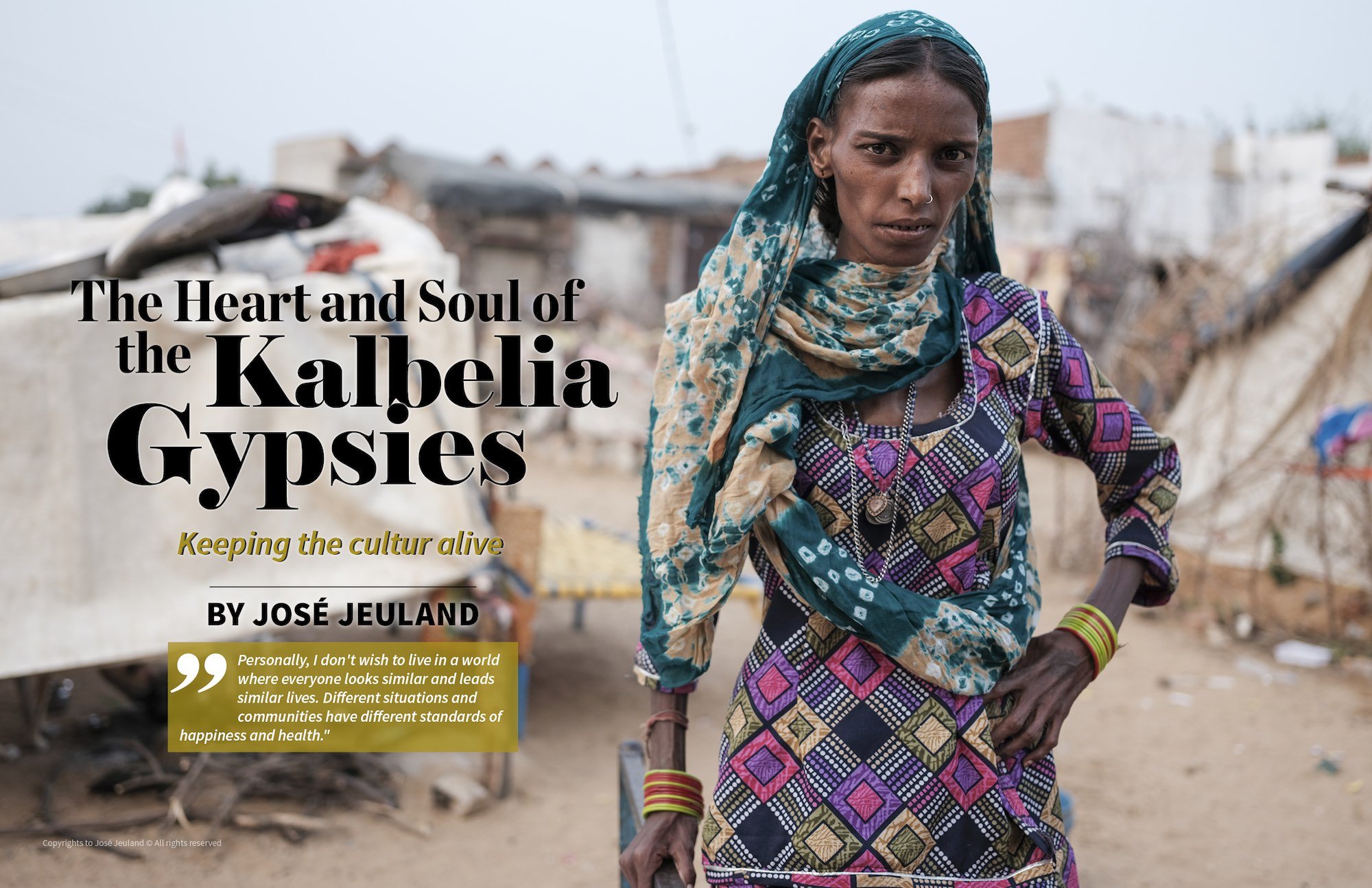 The Heart and Soul of the Kalbelia Gypsies” – Keeping the culture alive.

Photography is, and has always been related to storytelling. From capturing day-to-day moments to spotlighting crucial social issues and conflicts, photography’s aim is often to inculcate a deeper understanding of the world around us.

Increasingly, the world has been plagued by multiple issues such as discrimination, sociopolitical conflicts and climate change. This has had far-reaching impacts on not only humans, but nature and wildlife as well.

Testaments of the plight of various suffering often come in the form of writing, drawing and painting. More recently, photography has also been used as a way to portray these social issues.

For the most part of my career, I focused on telling stories about unique communities through documentary, reportage and photography. Most of my works are neutral, without any explicit commentary on controversial issues such as human rights. However, this has been something that I want to change – I want to start working on projects which contribute to our collective understanding and respect for diversity. 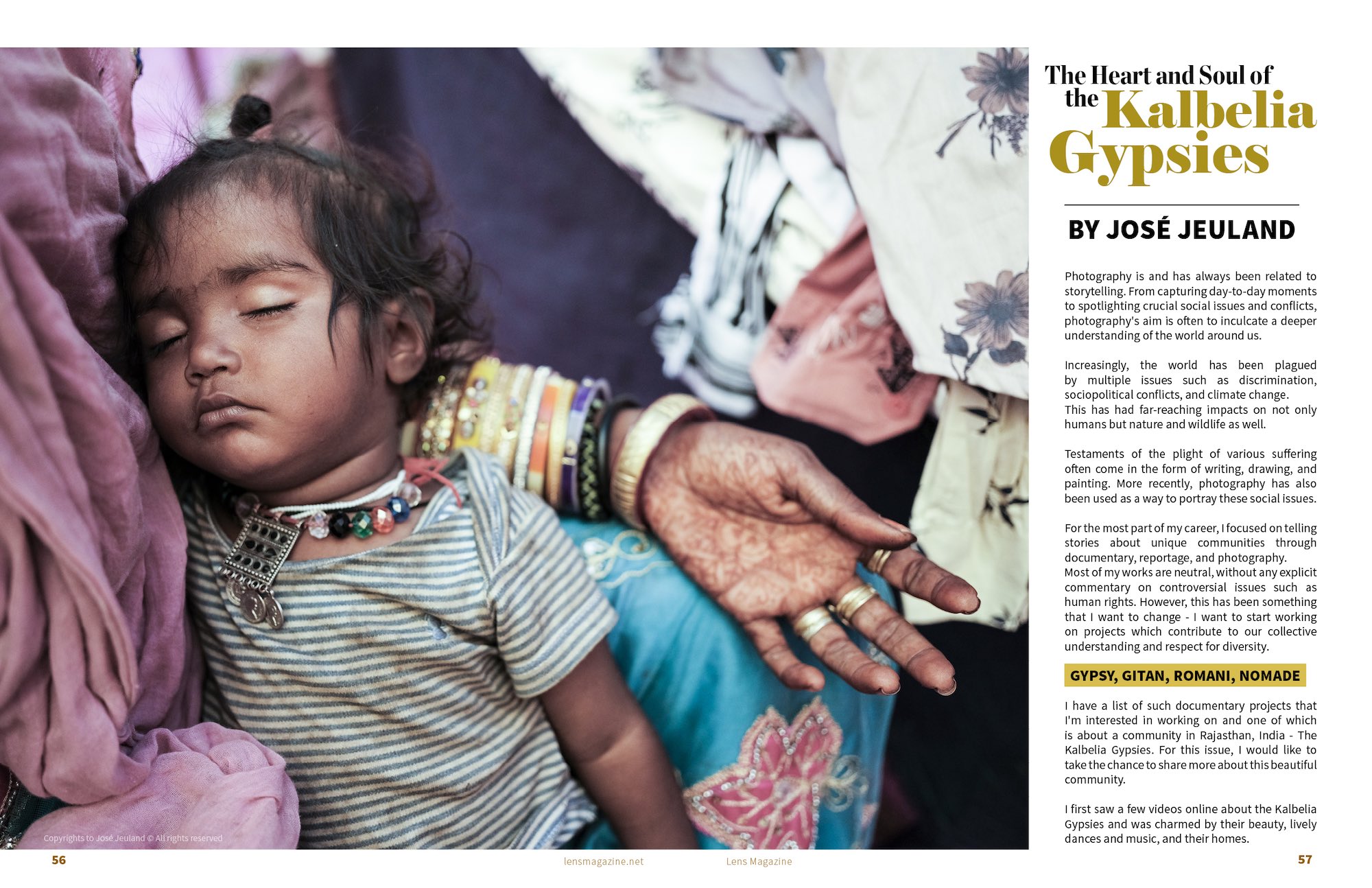 I have a list of such documentary projects that I’m interested to work on and one of which is about a community in Rajasthan, India – The Kalbelia Gypsies. For this issue, I would like to take the chance to share more about this beautiful community.

I first saw a few videos online about the Kalbelia Gypsies, and was charmed by their beauty, lively dances and music, and their homes.

Last November, I went to Rajasthan to cover the Camel Fair in Pushkar, and to work on a Travel story of Rajasthan for Tropical Life, a travel magazine. However, since it was the festive season in Pushkar with the Camel Fair, I didn’t want to do the documentary then as there were simply too many people. Instead, I decided to use the opportunity to establish a few contacts and gather some information about the Kalbelia Gypsies for a future project.

Previously, when I was living in France, the Gypsies there were generally stereotyped as thieves and trouble makers, and were not well-liked by people in France and even Europe. They are given pejorative labels such as ‘Gitan’, ‘Romani’ and nomads. Originally, they were from North East India in the Rajasthan state. Their Roma ancestors migrated to other places such as Europe, USA, South America and Asia between the sixth and eleventh centuries.

During my time in Rajasthan, I managed to meet and spend time with some of the Kalbelia Gypsies, where I learned more about their culture and the issues that they face. It was then that I established authentic connections with the Gypsies, and gained an appreciation for their unique way of life. This challenged many of the preconceived notions which I had of them. 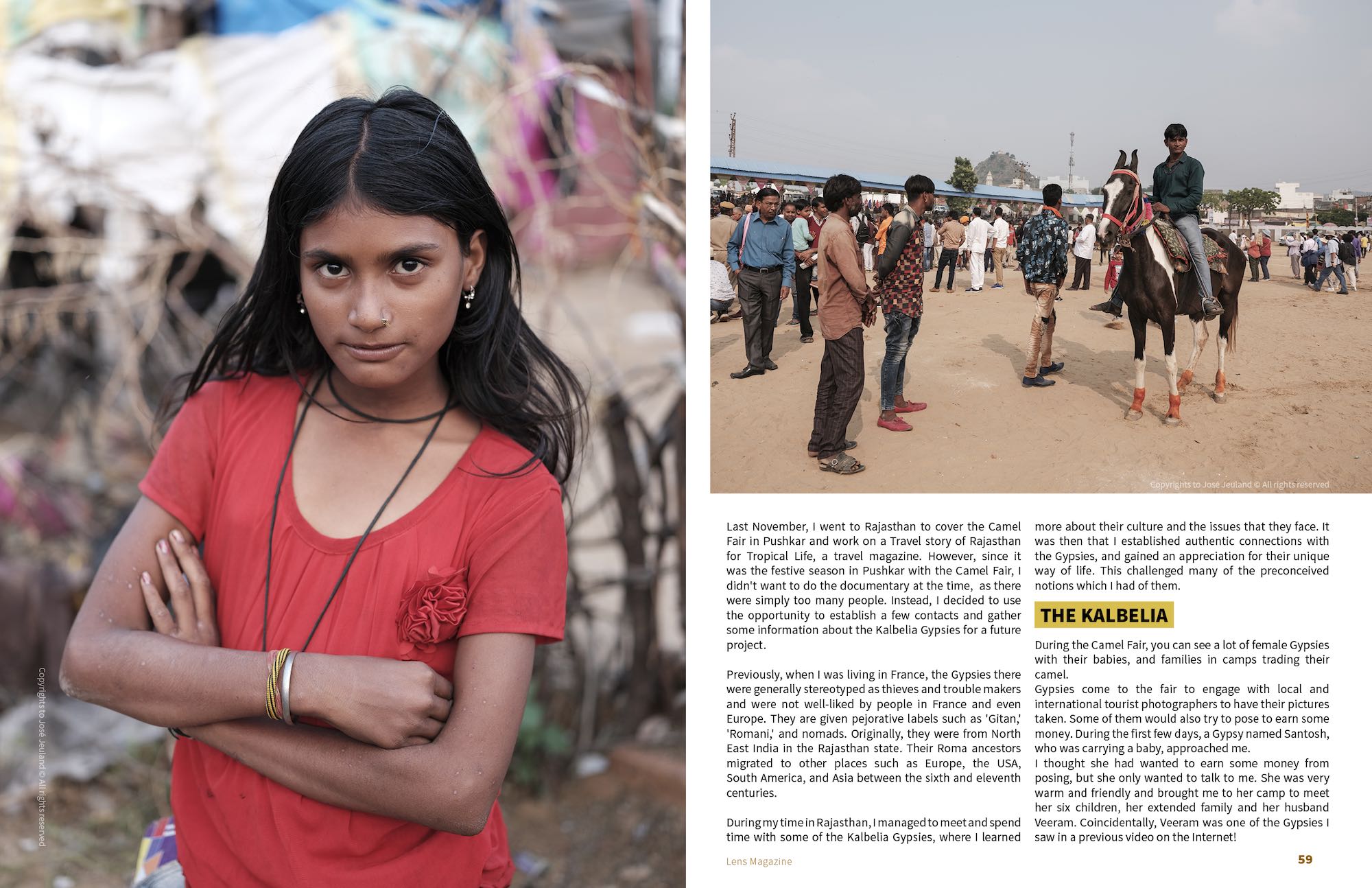 During the Camel Fair, you can see a lot of female Gypsies with their babies, and families in camps trading their camel.

Gypsies come to the fair to engage with local and international tourist photographers to have their pictures taken. Some of them would also try to pose to earn some money. During the first few days, a Gypsy named Santosh, who was carrying a baby, approached me. I thought she had wanted to earn some money from posing, but she only wanted to talk to me. She was very warm and friendly, and brought me to her camp to meet her six children, her extended family and her husband Veeram. Coincidentally, Veeram was one of the Gypsies I saw in a previous video on the Internet!

They live in tents made of wood, set up on a plastic sheet spread over sandy land. There is no water system, toilet or shower, but as with most other poorer communities I visited previously, they had mobile phones with Internet.

To liven up the atmosphere while I was there, the family played music and danced, and chatted in Hindi and their own dialect. Everyone looked very happy. The children, especially, are very active and bubbly, though most of them have some form of skin disease. They don’t go to school, but can still speak a bit of English.

Veeram and Santosh opened up to me about their difficulties. Both shared how difficult it was for them to make a living. They don’t receive help from aid organisations, only the occasional donation from some individuals. They also do not own property because land is mostly owned by landlords or the government. As with the ‘Gitans’ in Europes, they are not well-received by the majority. 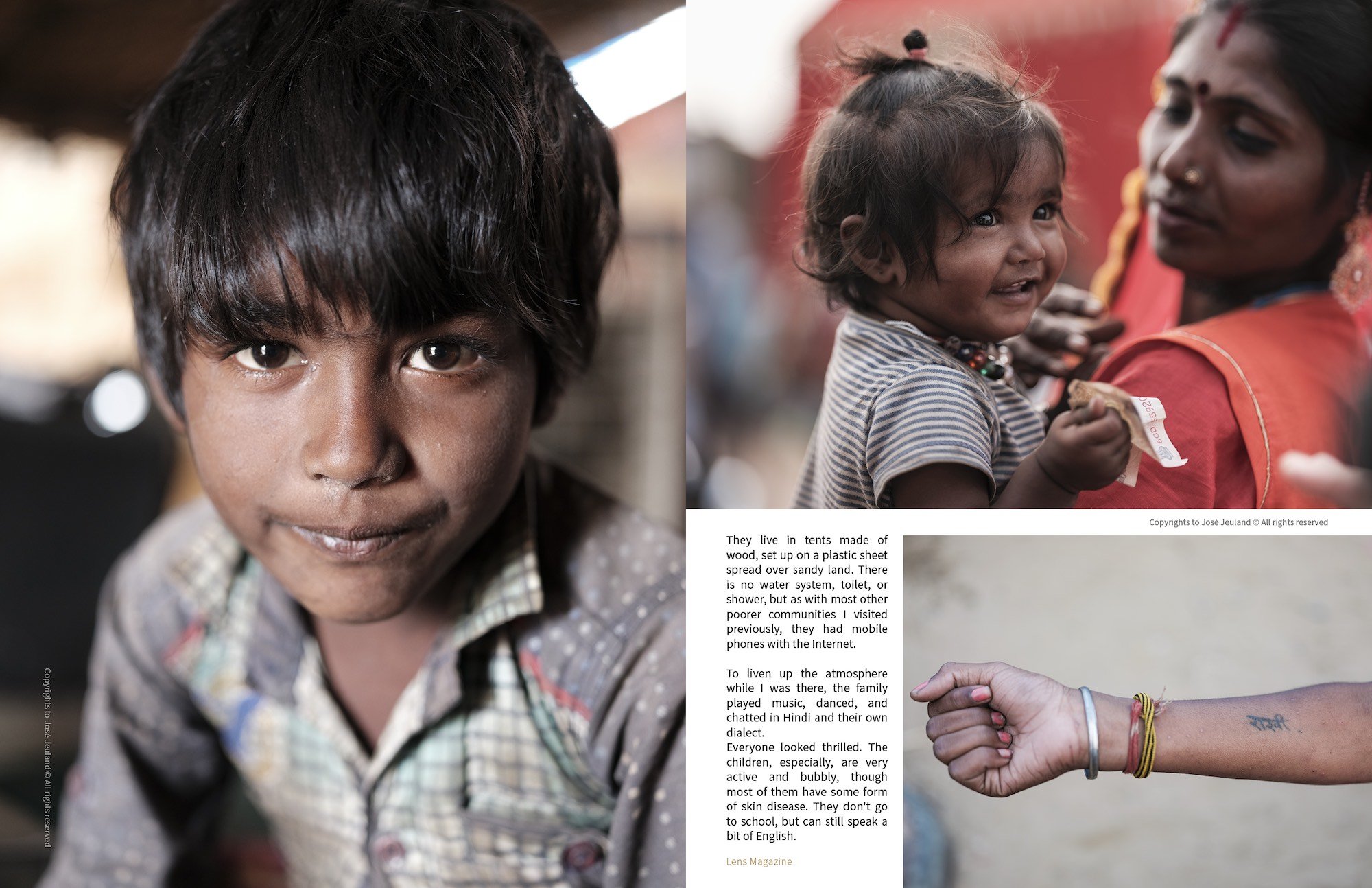 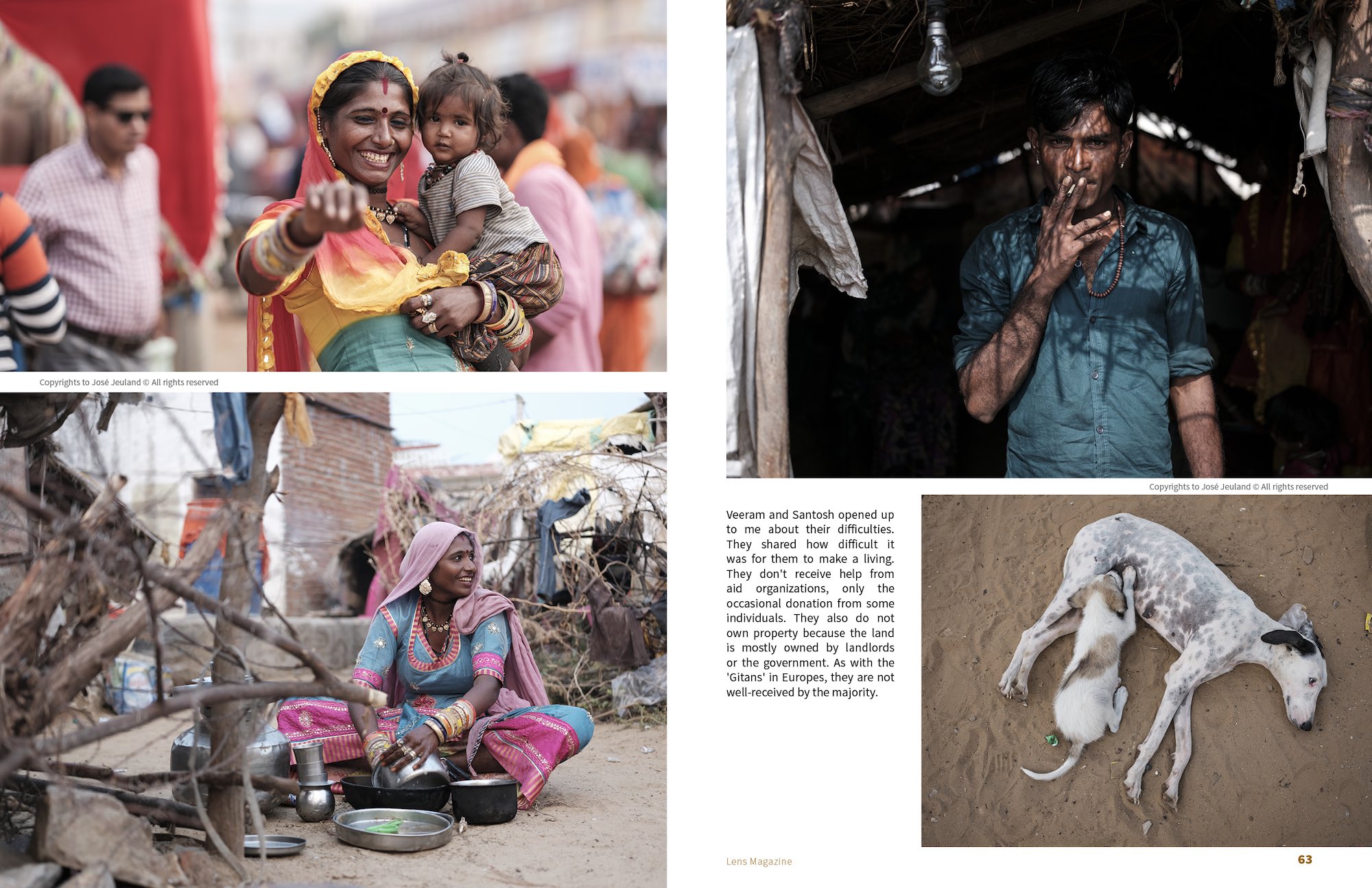 The COVID-19 situation has further worsened the Kalbelia’s quality of life. Their usual source of income comes from dancing and playing music in hotels, doing henna for tourists and selling handmade jewellery or coal. However, because of the lockdown, they are unable to earn this income at all. They also have no savings as well, rendering them unable to afford day-to-day expenses.

Recently, Veeram contacted me for help over Whatsapp, which gave me the idea to sell photography prints to help the Kalbelia Gypsies. This series of prints features various families in Santosh and Veeram’s camp.

With the support of my friends and followers, I donated the proceeds from these prints which helped support the daily expenses of a few Gypsy families. 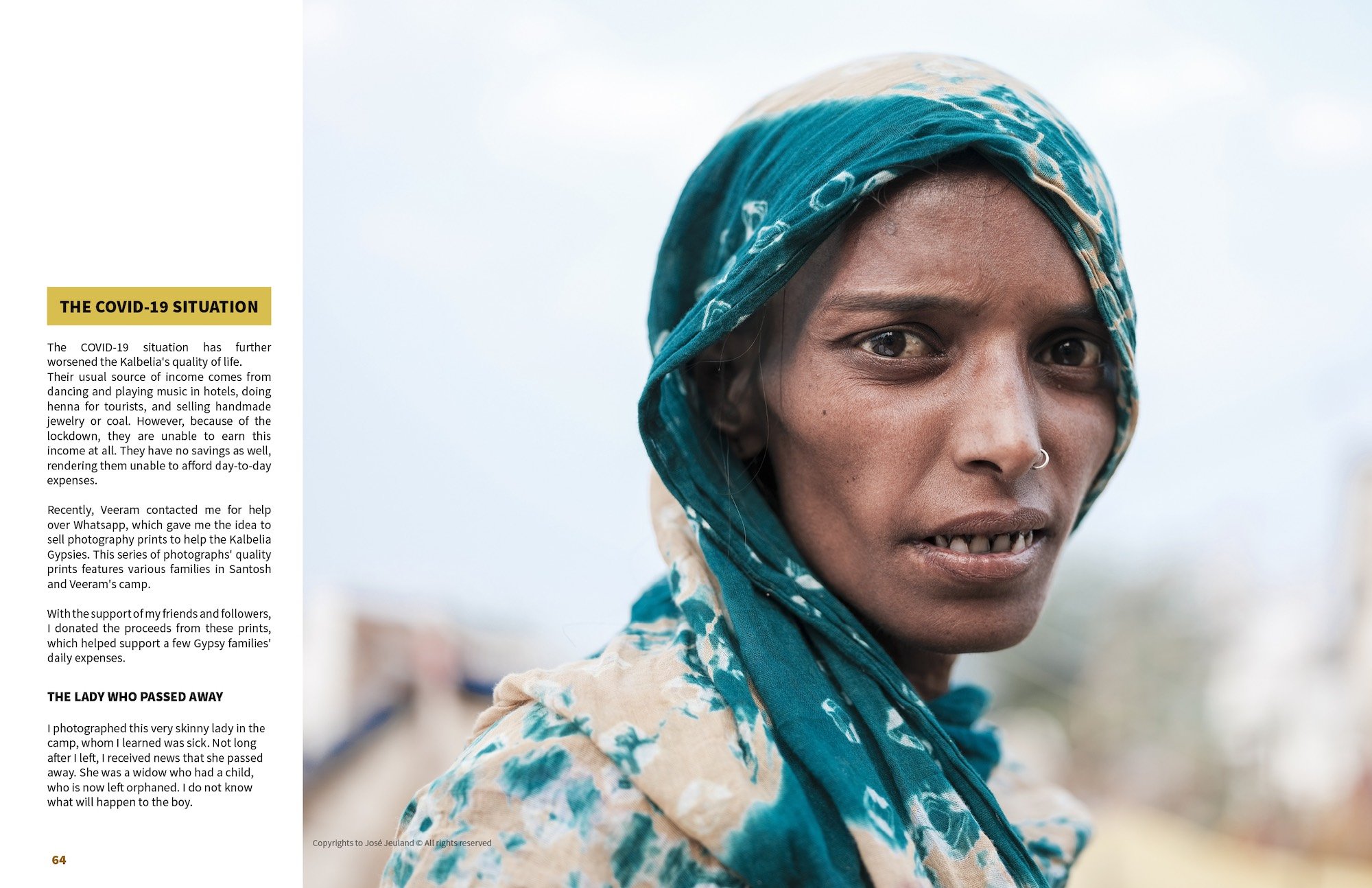 The Lady Who Passed Away

I photographed this very skinny lady in the camp, whom I learned was sick. Not long after I left, I received news that she passed away. She was a widow had a child, who is now left orphaned. I do not know what will happen to the boy. 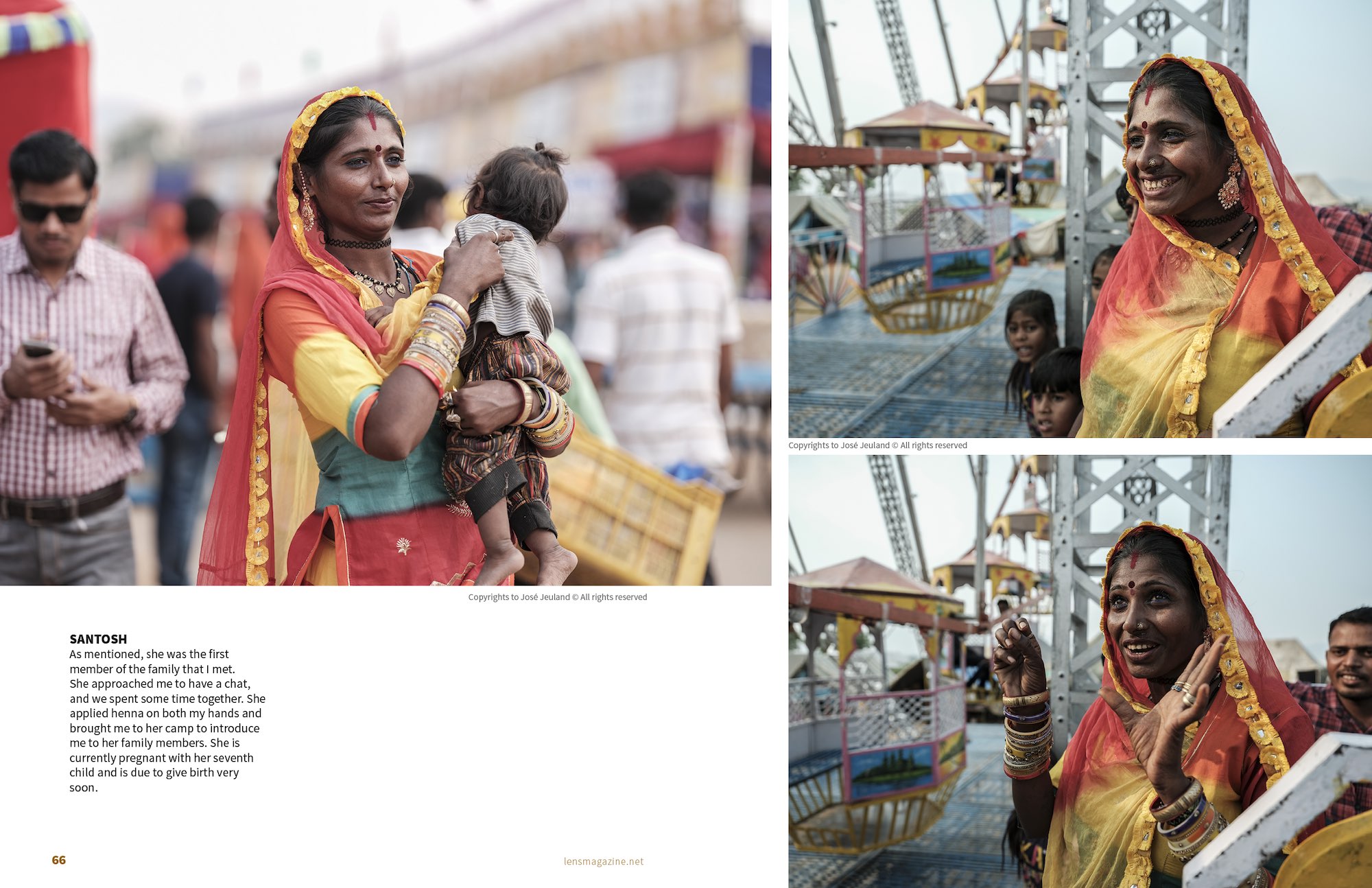 As mentioned, she was the first member of the family that I met. Santosh approached me to have a chat and we spent some time together. She applied henna on both my hands and brought me to her camp to introduce me to her family members. She is currently pregnant with her seventh child, and is due to give birth very soon. 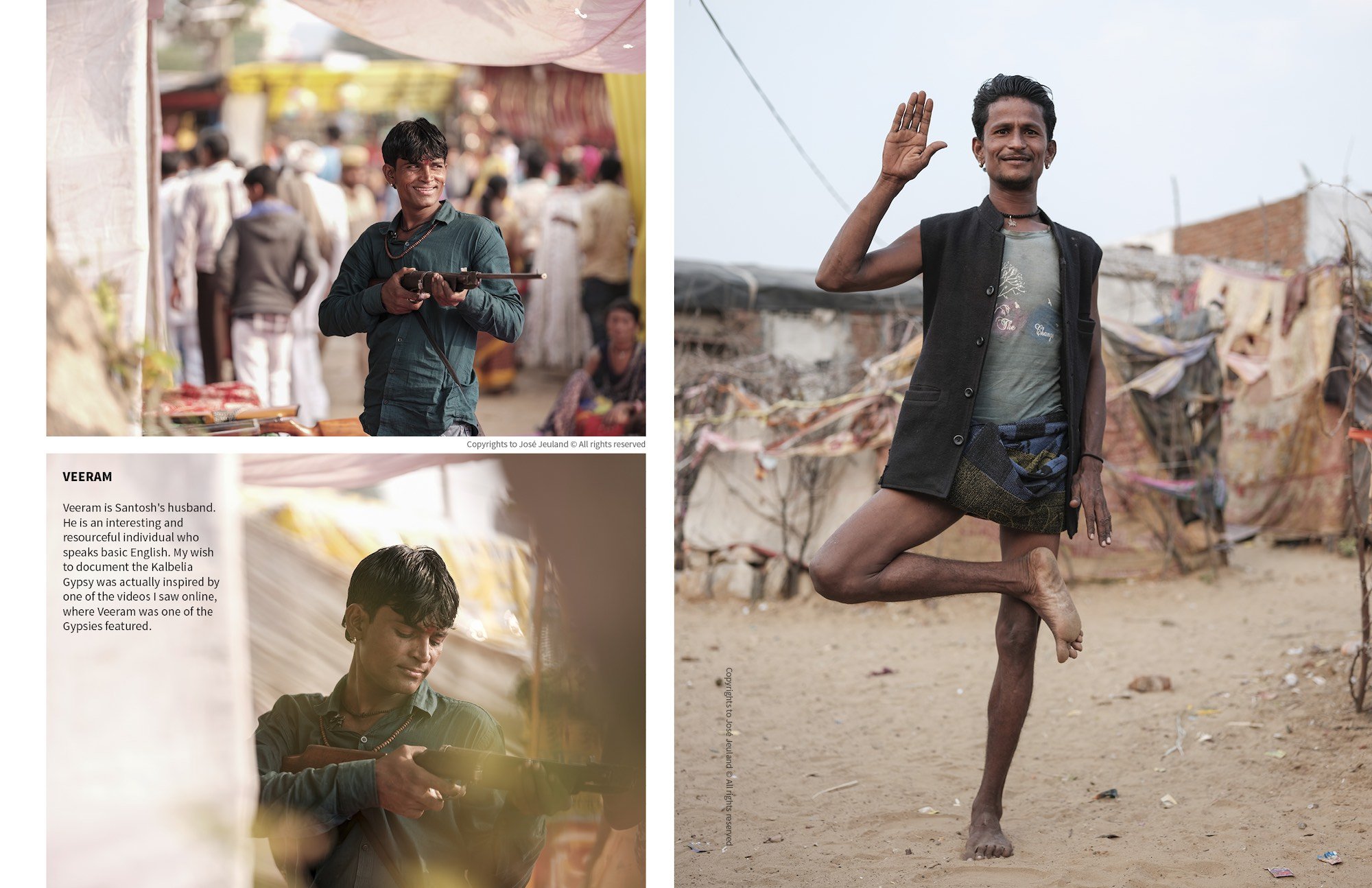 Veeram is Santosh’s husband. He is an interesting and resourceful individual who speaks basic English. My wish to document the Kalbelia Gypsy was actually inspired by one of the videos I saw online, where Veeram was one of the Gypsies featured. 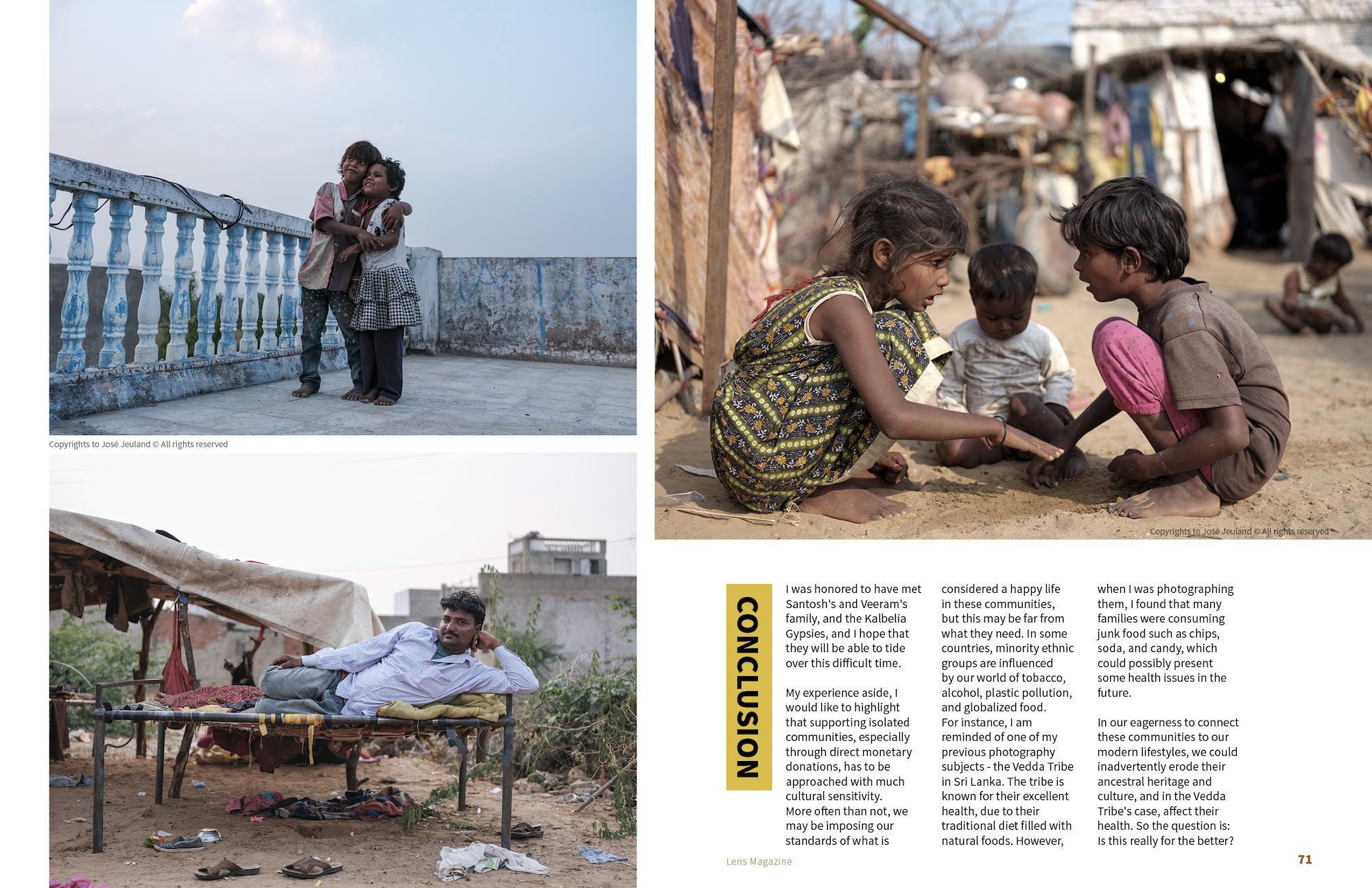 I was honored to have met Santosh’s and Veeram’s family, and the Kalbelia Gypsies, and I hope that they will be able to tide over this difficult time.

My experience aside, I would like to highlight that supporting isolated communities, especially through direct monetary donations, has to be approached with much cultural sensitivity.

More often than not, we may be imposing our standards of what is considered a happy life on these communities, but this may be far from what they need. In some countries, minority ethnic groups are influenced by our world of tobacco, alcohol, plastic pollution and globalised food.

For instance, I am reminded of one of my previous photography subjects – the Vedda Tribe in Sri Lanka. The tribe is known for their good health, due to their traditional diet filled with natural foods. However, when I was photographing them, I found that many families were consuming junk food such as chips, soda and candy, which could possibly present some health issues in the future.

In our eagerness to connect these communities to our modern lifestyles, we could inadvertently erode their ancestral heritage and culture, and in the Vedda Tribe’s case, affect their health. So the question is: Is this really for the better?

Personally, I don’t wish to live in a world where everyone looks similar and leads similar lives. Different situations and communities have different standards of happiness and health. While receiving an education, having a cellphone and having the money to buy food is certainly essential for survival in a modern society, I’m not sure if all these things are necessary for those communities living in places like deserts, jungles or even on water.

For this particular Kalbelia Gypsy camp, it is quite evident that they are already well-adapted to the modern lifestyle.  They earn money by trading coal, cobra snakes and provide entertainment to tourists. Instead of practising subsistence farming like other Gypsy camps which are less influenced by the outside world, the Kalbelia Gypsies use money to buy food. They also have other expenses – for modern medication, for transportation and other entertainment.

With even more influences from globalisation, would they want a house next instead of a tent? With more wants, they would need even more money to sustain their more affluent lifestyle. Would they be happier then?

From my time spent in Rajasthan, I have come to truly appreciate the beauty of the Kalbelia Gypsy culture – I sincerely hope the community will be able to maintain their heritage.

Though the current situation has disrupted my plans to produce a documentary about them, I’ll be looking forward to embarking on this project in the future. 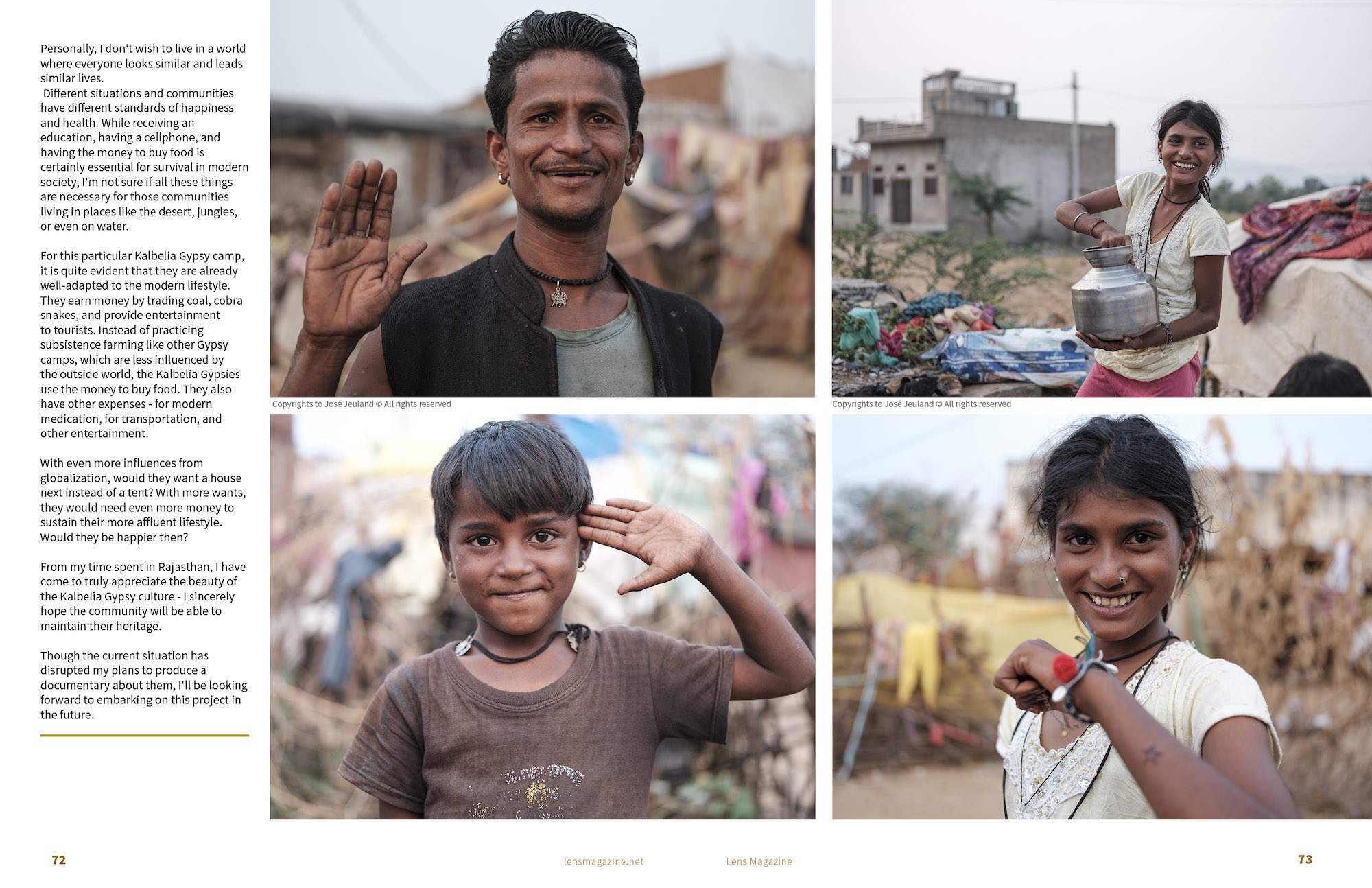 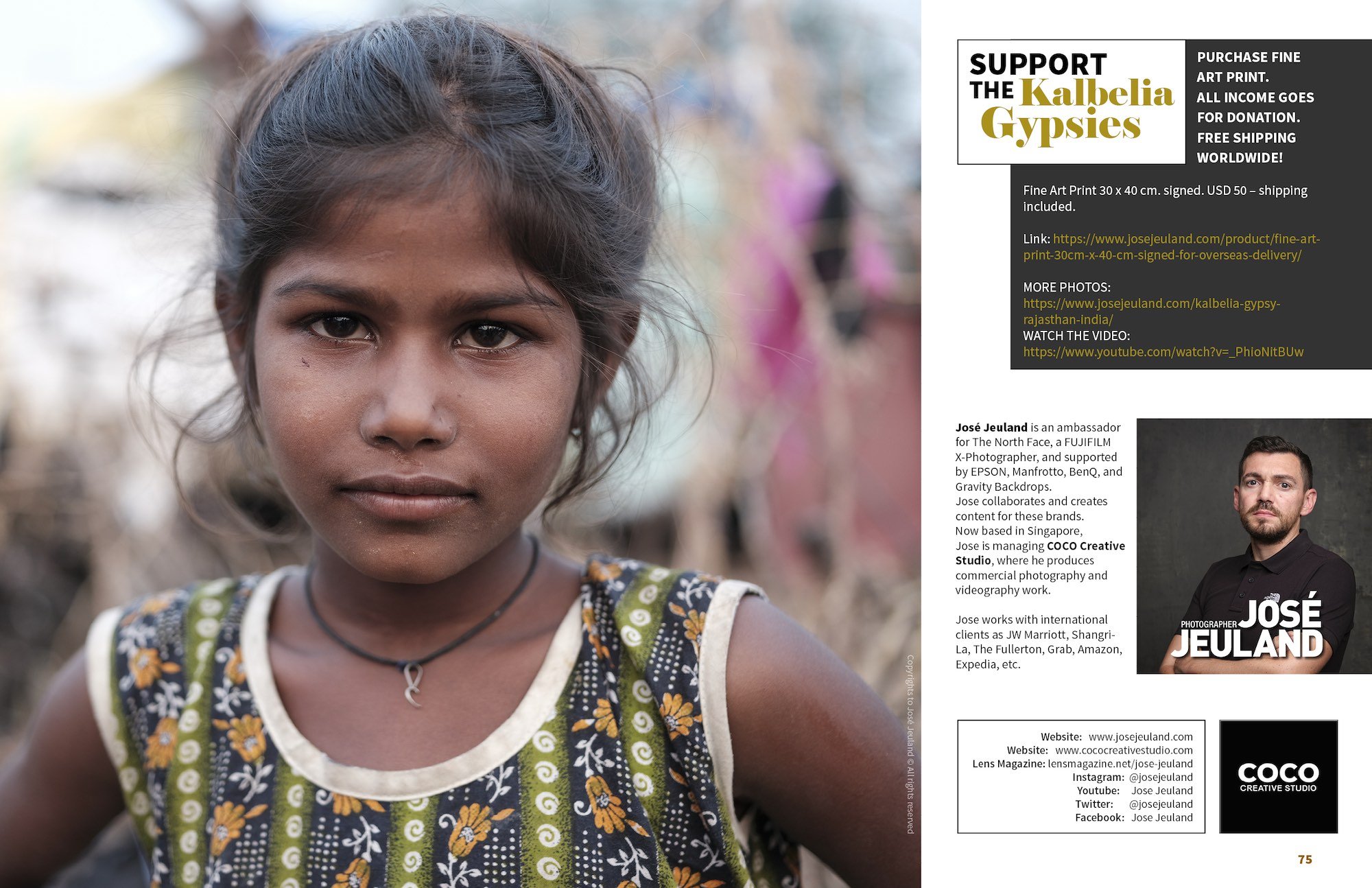 To support the Kalbelia Gypsy:

All the proceeds (excluding shipping cost + print cost) will go to them directly. To note* – I will not be incurring any money for this.

To watch the video: